Hey, Adam, here at The Roof Strategist. Today, I’m going to share a very powerful lesson for brand new salespeople and seasoned pros on how to understand this insurance process and how the insurance money works. This will help you communicate really clearly with a homeowner, so you can stand apart and win more business.

I’m going to do this in two parts:

Why analogies? Because we often get too in the weeds and too detail-oriented with the terminology of the insurance process or someone’s home or roof.

Instead, I want to break this process down into very simple stories that they’re going to understand. Since darn near every homeowner you serve has a car or a truck, let’s use that for our analogy.

Use a Car Analogy to Explain Roof Insurance Money to Homeowners

Using the car analogy, let’s pretend that you, our homeowner for this example, drive a 2015 Ford F 150 pickup that was a top-of-the-line truck when you bought it. Here’s how we get started.

Now, let’s say something bad happens, and the car gets totaled (but don’t worry, everyone’s okay). Someone crashes into the parked vehicle, and it gets smashed. Now, the vehicle is done.

What does the insurance company do? Well, they’re going to cover it because you’re insured, right? But are they going to write you a check for $50,000?

No, they’re not because the vehicle is 5 years old, and it has a bunch of miles on it. So, the insurance company owes for like kind and quality. I’ll show you how this comes into play here in a minute.

240+ Video Library for Storm and Retail

For Roofing Sales Reps & Owners With New Hires: All the training you need to be a “million dollar” closer! 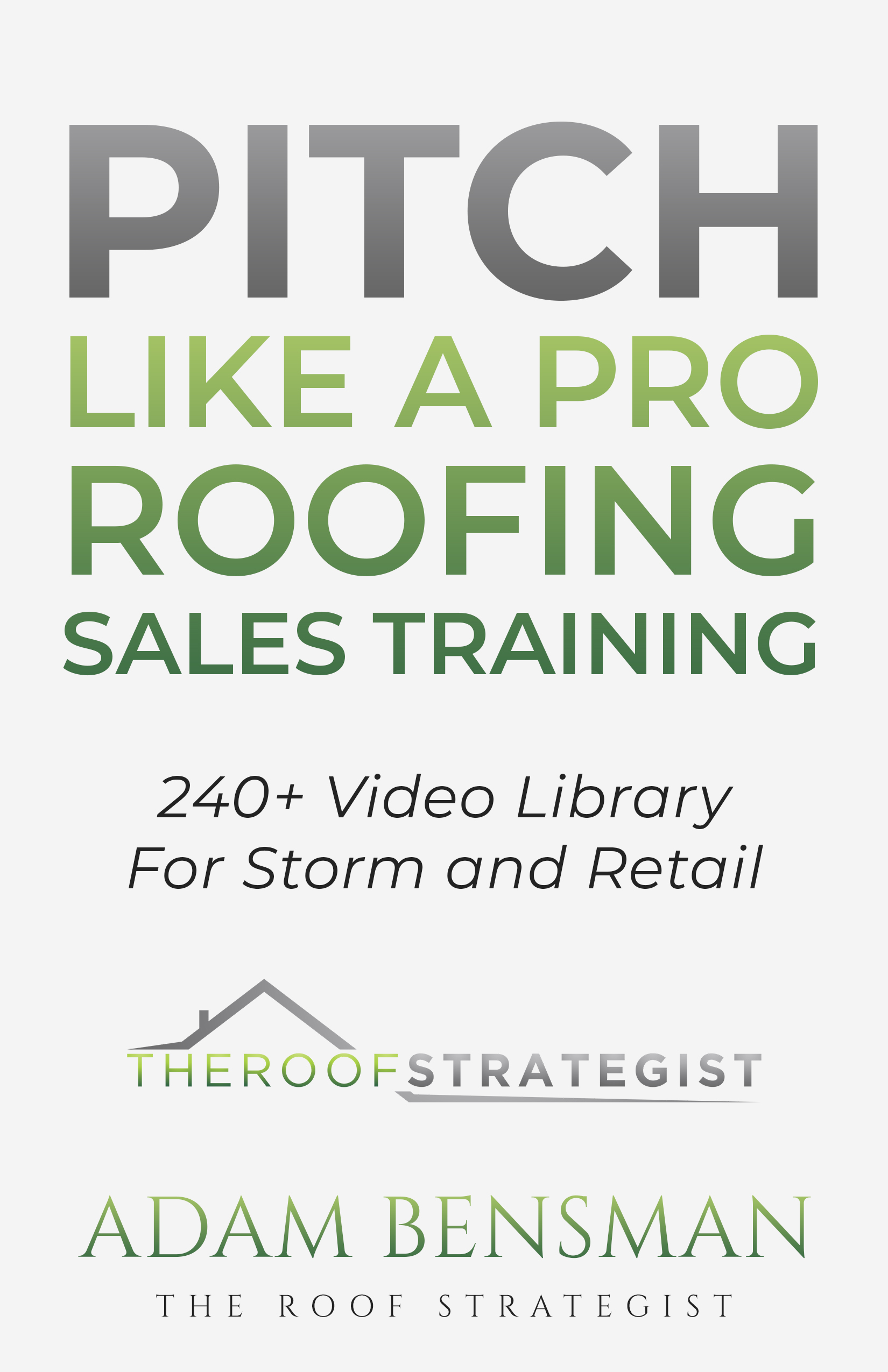 How the Deductible & Actual Cash Value Work: The Vehicle Analogy

Next, we explain the deductible and how actual cash value works.

What to say to a homeowner: The insurance company’s not going to write you a check for $25,000 because you still owe your deductible.

The deductible is the contractual agreement between you, the homeowner, and your insurance company. It’s the same no matter what, regardless of whether there’s a $2,000 loss or a $2 million loss.

Side note, here. I know there are some new deductibles coming up, which are a percentage of the claim or a percentage of the home value, like 2% of the value of the house. Generally speaking, though, that contractual agreement is going to be a fixed cost. So, continuing with the homeowner, here’s how we break down actual cash value and the deductible.

What to say to a homeowner:  We’re going to subtract your deductible from the $25,000, which is the actual cash value (ACV) of your vehicle — meaning that is what the vehicle is actually worth today (in 2015 that F150 was worth $50,000, but today, it’s worth $25,000). The ACV is some insurance language that you’re going to see come back later. It’s what the roof is worth today, the actual cash value.

So, if your deductible is $1,000, that means you said, when you got your insurance policy, that you’re committed to covering the contractually obligated portion of the claim by paying that deductible.

So, here, you would receive a check for $24,000. This is the first payment, and here’s what the math looks like.

Recap: If an insured vehicle gets totaled later, we’re going to get paid the actual cash value or the ACV (meaning what it’s worth now) minus the deductible. That’s our first check.

How does this relate to the roof? Now, it’s time to jump on the other side.

How to Explain Roof Insurance Money to Homeowners

To bring this home to roof replacements, we need to show the homeowner how ACV for the car analogy translates into replacement cost value for their roof.

What to say to a homeowner: Let’s say your roof, brand new, was $20,000. That’s the cost to replace the roof — the replacement cost value (RCV). The RCV is like the ACV we talked about for your truck.

So, you have a $20,000 roof you need to replace. But that roof is now 15 years old, and it was expected to last 30 years. That means half of its lifespan has been used up.

The initial payment for your roof is going to work just like your truck. The insurance company is not going to pay what it’s worth at sticker price, brand new. They’re going to pay you what it is worth today, the actual cash value.

At 15 years old, that’s about half the roof’s lifespan. You’ll see this come up on these scopes of loss, the amount of depreciation, which they’ll either do in a percentage or a number of years.

Like with your truck, again, your amount might be your deductible. For an apples-to-apples comparison (to the vehicle analogy), we’ll say the deductible for the roof is $1,000. That means you would receive a $9,000 first payment.

Some policies will only cover the actual cash value, meaning the homeowners will have to come up with the extra $10,000 for their roof. That’s a very rare thing we have to look out for, so you have to ask about it.

Generally, though, homeowners will have full replacement cost value coverage, meaning the entire roof will get paid for.

How to Explain Vehicle Claims vs. Roof Claims

It’s simple. This is where it’s a little different than car claims, though, because homeowners who might have gone through this process might be thinking, I have $24,000!

It does NOT work that way when it comes to their home, and the reason for that is simple. Now, this is so important to understand because of the deductible objection. Homeowners will say, “I don’t want to pay my deductible!” or “Help me save some money here.”

You’re going to run into this a lot, and it’s really important that you understand how to overcome it.

How to Explain ACV vs. RCV

Now, the homeowner has received this check for $9,000. The difference between what their roof is worth today versus what it was worth when it was new is called the depreciation. Going back to the car analogy, here’s how you explain the difference to homeowners.

What to say to a homeowner: Just like a car — a brand new car that you drive off the lot — your roof will depreciate in value. It goes down in value. So, depreciation describes the difference in value, the difference between what the roof is worth right now versus what it costs to replace it.

Now, here’s where it gets fun. The insurance company WILL pay the full $20,000 minus the deductible to get the roof done.

Here’s the catch. The only way for that homeowner to receive the total RCV, the replacement cost value, is to complete the work — to actually do it, complete the work, and invoice the insurance company.

Here’s what that means to you.

How to Use the Roof Insurance Money as a Sales Tool

When the homeowner gets the check for the actual cash value minus the deductible, this is how you can use that money as a sales tool.

What to say to a homeowner: I’m going to assess your property and make sure everything has been documented properly on the paperwork. That’s the paperwork you’ve received or will be receiving.

Then, I’m going to go ahead and facilitate all those repairs, line item by line item, so you know exactly what I’m doing. After that, I’ll invoice the insurance company saying “Hey, State Farm or Allstate or whoever, we did this homeowner’s roof. Please release the depreciation that is left over.”

In other words, the insurance company is going to hold this money to them close and say, “We’re only going to release the depreciation when you actually do the work and prove it.” This is incredibly important.

Why Does the Insurance Company Hold onto the Money?

Now, in roofing sales, we know there are two reasons why the insurance company does this. Here’s how to explain each reason to homeowners — and keep in mind that the second point is critically important for anyone in roofing sales to understand because a lot of seasoned sales guys don’t know this.

By the way, I have seen this happen in the field. Personally, I’ve worked on claims that I thought I had in the bag, and then the adjuster showed me that claim had been paid. So, it’s key to point out to homeowners that the insurance company holds on to money to protect its own interests. They’re paying less upfront, and the roof’s no longer insured.

The final point to explain to homeowners can really make an impact. You’ll bring it back to the car analogy here and explain how trying to pocket the cash can be insurance fraud.

What to say to a homeowner: Now, here’s the other thing, Mr. or Mrs. Homeowner. Remember, in the car analogy I just talked about, how someone might look to save some money? They’d buy that next car for $20,000, so they can put the extra $4,000 in their pocket. And I told you that it doesn’t work like this for roofs because the only way to cover the costs is to invoice the insurance company.

That puts you, as the homeowner, and the contractor in a position of insurance fraud because you are providing false information to the insurance company, saying, “we did it for this,” when you’re actually going to pocket the difference.

That’s how I use the analogy to explain this process and make it crystal-clear for homeowners.

Recap: How to Explain Roof Insurance Money to Homeowners

Let’s recap with a quick summary, so you know how to present this next time you’re talking to homeowners.

If you need to bring a little sketch pad and sketch this out for homeowners, it will help them make sense of everything because all of them are focused on one thing. They’re thinking, how do I take this and save money?

When you explain the roof insurance process this way, regardless of whether you’re a seasoned pro or you’re brand new to roofing sales, you’re going to overcome that deductible objection. You’ll know exactly what to do when you hear homeowners say, “I don’t want to pay it. How much can you save me?”

For more on roof insurance claims and money, check out my videos on How to Start Reading Scopes of Loss, What to Do When Homeowners Don’t Want to Pay the Deductible, and 3 Steps to Getting Homeowners to Agree & Sign with You.

Also, check out my Marketing Battle Pack for instant access to more than 70 pieces of my proven, turnkey roofing sales and marketing materials. It’s affordably priced and comes with a 100% money-back guarantee. There’s also a playlist of instructional videos in there, explaining every single thing. So, you can watch the videos, and you’ll know exactly what to do.

Thanks for joining me, and I look forward to sharing more with you in the next blog. 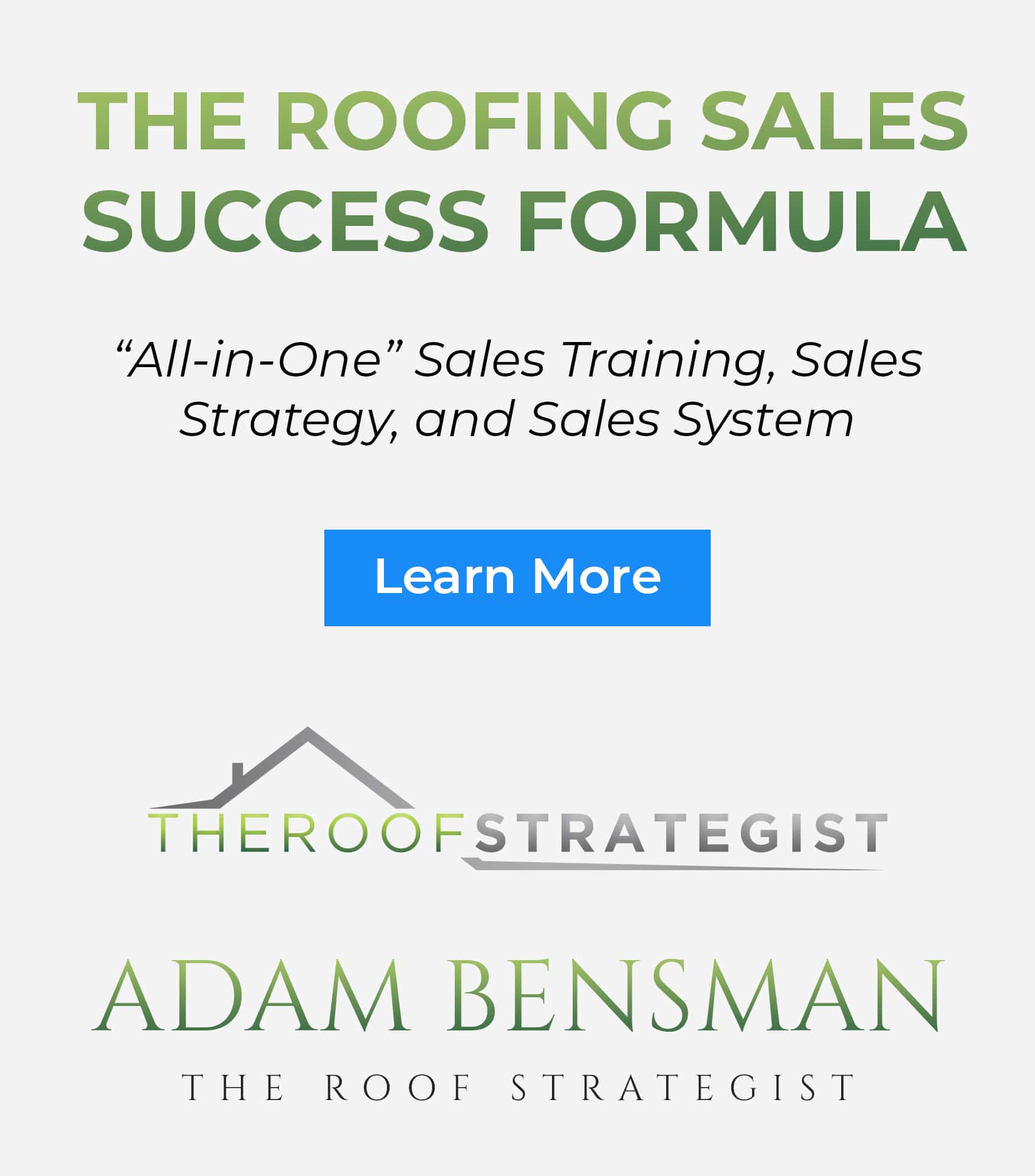